The arborloo (tree or trees planted on or around a pit toilet), the Charborloo, a variation on the Arborloo, ecosanitation, human manure, human urine as a fertilizer.

“Designate a place outside the camp where you can go to relieve yourself. As part of your equipment, have something to dig with, and when you relieve yourself, dig a hole and cover up your excrement.” Deuteronomy 23:12,13.

Discussing the topic of using human manure to grow plants is unpleasant to some, but in some countries the poverty and hunger is so desperate that human manure and urine may be the only fertilizer available or affordable. In richer countries, there is also the issue of recycling waste. Below is an article discussing the Arborloo (a pit toilet, or tree toilet – when the toilet is nearly full a tree is planted on top, or trees or other plants are planted around the toilet while it is still in use); and introducing the “Charborloo“, an invention of mine which may prove to be useful in some situations – click here: charborloo 090212. The article contains some speculation (which may turn out to be wrong). The heat from the charborloo should destroy any diseases or parasites which may be present, and the charring of the manure, and additional charred materials, should prove beneficial for growing trees or other plants.

If diseases are a potential problem, adding black soldier fly (Hermetia illucens) larvae to Arborloos may decrease the residence time of pathogens, and reduce this problem – “Hermetia larvae are known to reduce pathogens in manure” ( Newton, Sheppard and Burtle 2011) – see http://www.extension.org/pages/15054/research-summary:black-soldier-fly-prepupae-a-compelling-alternative-to-fish-meal-and-fish-oil/

Alternatively, or in addition, the pit could be lined with a waterproof, genuinely bio-degradable plastic (made from wheat cellulose, maize starch, or similar) to prevent pathogens from entering the ground water.

Small quantities of human manure could be sterilized in cheap solar cookers, (made of cardboard and aluminium foil for example), with the sterilized manure then buried and used to grow trees, fodder or crop plants. Placing manure (perhaps on about twenty sheets of newspaper) in solar cookers for two or more hours in the sun in the middle of the day in the tropics should be more than sufficient to kill disease organisms/parasites. A sheet of clear plastic should completely cover and seal the cooker, held down with weights such as rocks, to keep in the heat and smell, and to keep the flies out. If a plastic bucket or bowl is lined with about twenty sheets of newspaper, and used for a few defecations (with each defecation covered by sawdust, soil, rice husks or similar), the newspaper and manure could be sterilized in a solar cooker, and then placed in the base of a Zai hole, providing a water barrier as well as nutrients and organic matter (See the modified Zai hole illustration on the Zai holes page – click on the button on the menu bar above). In cooler climates, this may only work on hot summer days, and heat treatment should be longer. 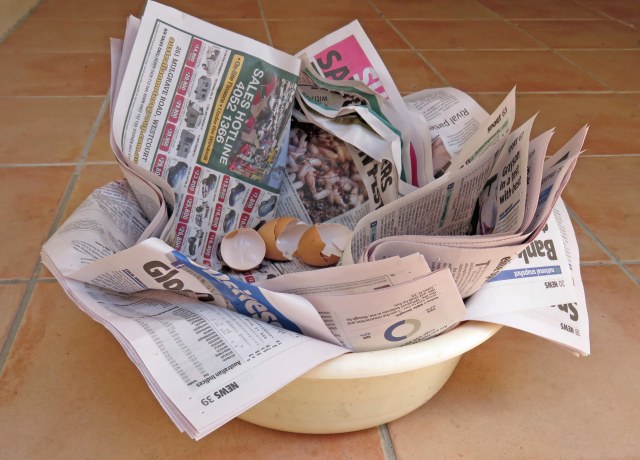 A plastic “washing up bowl” lined with 20 sheets of newspaper, for defecation. The whole lot can be placed at the bottom of a hole which has a concave base, and then plant trees or other plants. Household food waste could also be added, such as egg shells and vegetable scraps. With an arrangement like this, defecation could occur inside a home, instead of a separate outdoor toilet. The human manure would of course be covered with sawdust, soil, rice hulls or similar after each defecation.

Alternatively, the newspaper and manure could be placed at the bottom of a Zai hole that has a concave base, and water boiled/heated in a solar cooker, or over a small fire, and the hot water poured over the manure. If a fire is used, the charcoal and ash from the fire could then also be mixed into the soil which is to be placed above the manure, to fill the hole before planting.

An arborloo in the Philippines. Photo: sswm.info.

While the issue of disease and parasites is manageable, there may be a cultural or psychological aversion to using human manure for growing food. This could be circumvented by growing plants for uses other than food e.g. animal fodder, mulch, timber, fuelwood. Fast-growing grasses (e.g. Phalaris, Napier, bamboos) should prove to be well-suited to growing with human manure, as their fibrous and extensive root systems are likely to make efficient use of all the manure. Grasses are useful for fodder, mulch and making compost, all of which indirectly increase food production for people. Palms also tend to have a dense compact root system and should make efficient use of the nutrients that are concentrated into a small space in an arborloo. Some useful palms include: coconut, date, oil, Acai, Salak, Butia catarinensis, Jubaea chilensis, Sabal palmetto, Hyphaene spp., etc.

There are of course many useful trees which generally grow well on or around an Arborloo/pit toilet. Peter Morgan in Zimbabwe has grown a wide variety of fruit and timber trees, with great success.

It should be worth trying Faidherbia albida trees, established by direct seeding (or started in tall plastic bags/sleeves) on top of or preferably around an Arborloo. Perhaps 3 or 4 trees could be started around each Arborloo, and the best tree selected later (and the inferior trees removed to reduce competion). A deeper than normal pit toilet is likely to work best, since in semi-arid to arid areas such as the Sahel, Faidherbia trees rely on developing a deep tap root as quickly as possible (and typically at the expense of top growth) to reach the water table which may be many metres or even tens of metres below the surface. The Arborloos could be spaced about ten metres apart.

Grains or vegetables grown beneath the canopy of Faidherbia trees a few years later should be two to even four times more productive. Prosopis cineraria may also work well in India and surrounding countries, with increased production of grains or vegetables grown beneath its canopy. With the additional organic matter and nutrients provided by the human manure, Faidherbia and Prosopis trees may grow faster on or around an Arborloo, developing a larger canopy earlier, and thus increasing food production earlier.

A combination which may prove useful planted around a pit toilet in a moist to wet tropical or subtropical climate could be Gliricidia sepium (or other n-fixing tree), plus Pennisetum purpureum (or Panicum maximum or Andropogon gayanus for example) and Tithonia diversifolia (the leaves can be soaked in water for a few days to make a high phosphorus and nitrogen fertilizer”tea”, or composted), since they all provide animal fodder, fuel wood, and mulch or compost for growing grains or vegetables, and some provide nectar for honey bees, and habitat/nectar for wildlife. Alternatively, they could be grown separately on different Arborloos.

Guinea grass and crotalaria growing together. A combination such as this could produce fodder, mulch or material for compost.

They can all be grown easily from large cuttings pushed straight into the ground. Mulch (or compost, or vermicompost) from these plants could be used on vegetables or grains grown beneath Faidherbia trees, for even greater productivity – the combination should result in a many-fold productivity increase, especially in naturally infertile or depleted soils.

Arborloos may be suitable to grow Neem trees Azadirachta indica to provide leaves, oil, seeds etc. some of which can be used as insecticidal sprays, to repel pests of stored grains, and leaves or powdered seeds can be incorporated into soils and may reduce nematode populations. Neem is also a good shade tree. 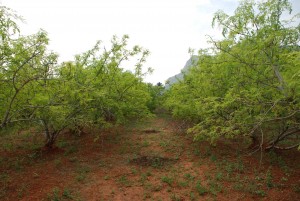 Moringa oleifera trees. These may grow well around an arborloo, providing nutrient rich drumsticks and leaves. Photo: moringa-seeds.com. The productive, annual variety PKM-1 is available from this source. A couple more photos below.

Tithonia diversifolia leaves are high in nitrogen and phosphorus (about 4%), and can be used to make compost, or steeped in water to make fertilizer “tea”, and the stalks used as fuel wood. The leaves should have relatively high levels of nutrients such as phosphorus, recycled from human manure, if grown on an arborloo. Compost made from tithonia should provide highly available phosphorus to crops, and even more so from vermicompost (compost made by earthworms) made using tithonia leaves.

Below is a paper on cattle feedlot (manure) biochar – charred animal manures (including human manure) show promise, and research in the future may show that phophorus availability is increased:

http://www.ecosanres.org/ click on “Trees as recyclers of nutrients from human excreta” by Peter Morgan. Also information on using urine as a fertilizer, e.g. Factsheet 6.

See also biochar links on the links page, and the Terra preta page.

http://www.iboro.ac.uk/well/resources/fact-sheets/fact-sheets-htm/Ecological%20sanitation.htm/ This link may not work.

Eucalyptus tereticornis. Peter Morgan in Zimbabwe has achieved exceptionally good results planting Eucalyptus tereticornis, E. grandis and mulberry trees around arborloos while they are still in use. He also advocates the use of diluted human urine as a fertilizer to get the trees off to a good start. See photos below.

For more information on using diluted human urine as a fertilizer, visit http://www.ecosanres.org/. 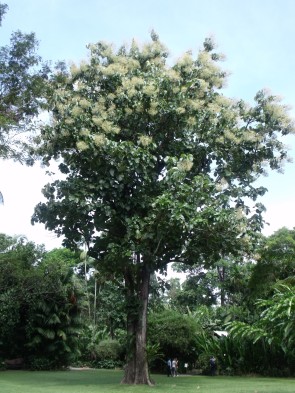 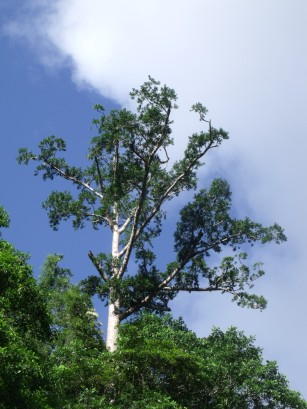 Perhaps timber trees such as Khaya spp., Acacia mangium, Kauri Pines, Teak, Australian red cedar Toona ciliata, Mahogany and Paulownia trees for example, may do well starting their growth on or around an arborloo.

The leaves of Moringa oleifera, also known as the Drumstick or Horseradish tree are high in nutrients and trace elements, and can be used either fresh or dried, and added to stews for example. Moringa leaves are helpful for treating malnutrition, and for breast-feeding mothers – more information can be found at www.echonet.org, and many other sites on the web (many sources rave about it). While the tree can grow well in infertile sandy soils, they should grow better on or next to an Arborloo, extracting and recycling trace elements and other nutrients from the composted human manure (this may also apply to pigeon peas, Cajanus cajan, and edible-seeded Acacias, such as A. torulosa and A. holosericea – see www.worldwidewattle.com ).

Crosses between M. oleifera and M. stenatopetala may prove to be more vigorous than the species. M. ovalifolia is eaten by wildlife and is a fodder plant in Southern Africa, and M. drouhardii is found in Madagascar. The variety PKM-1 is very productive (both leaves and pods), low-growing and so easier to harvest, with palatable leaves. It is available from www.echonet.org (and may be available from Tamil Nadu University in India, where, if I remember correctly, it was bred, along with other useful varieties – hats off to them for doing a wonderful job!). 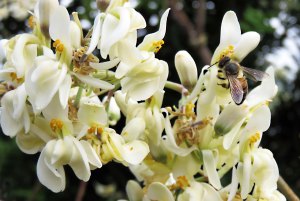 Arborloos also provide an opportunity to grow plants for wildlife habitat, biodiversity, attracting beneficial insects, etc. For some possibilities see the pages (click on the buttons on the menu bar at the top of this page): “Fire no fines concrete Living Fences”, “Wetland Reforestation” and “Reforestation methods”.

The nectar and seeds of the African tulip tree, Spathodea campanulata, attract wildlife. 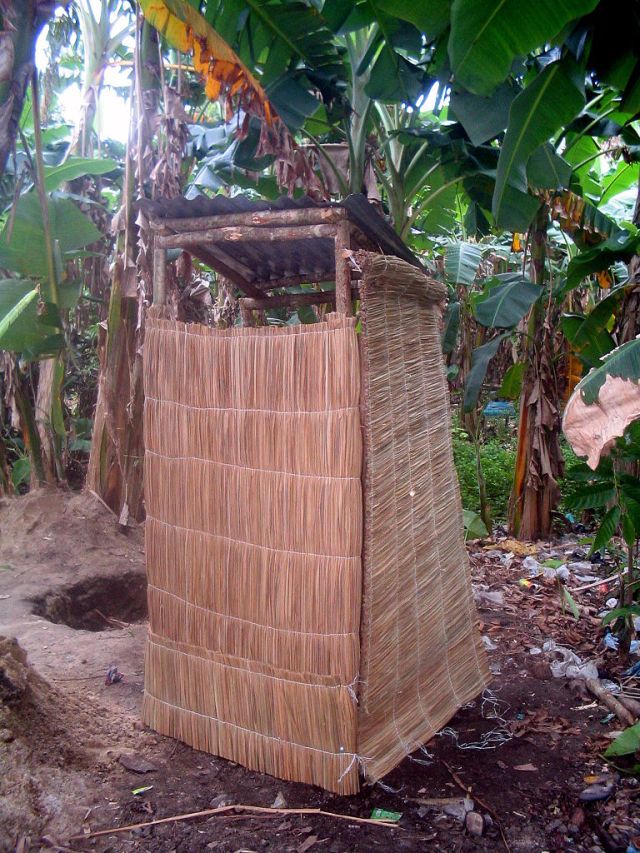 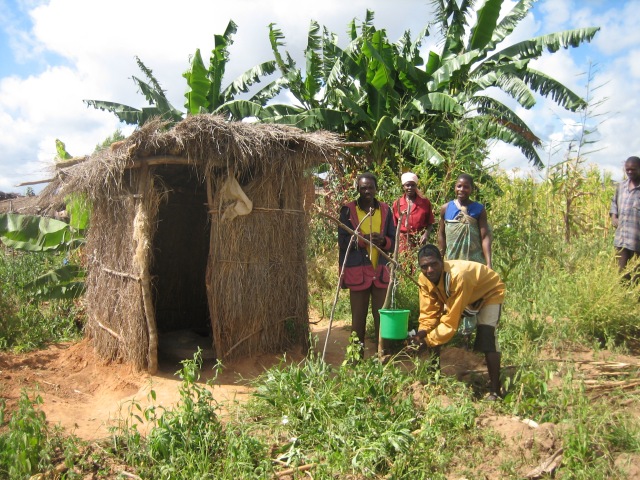 Arborloo in Africa with bananas growing around it. Photo: SuSan. Commons.Wikimedia. 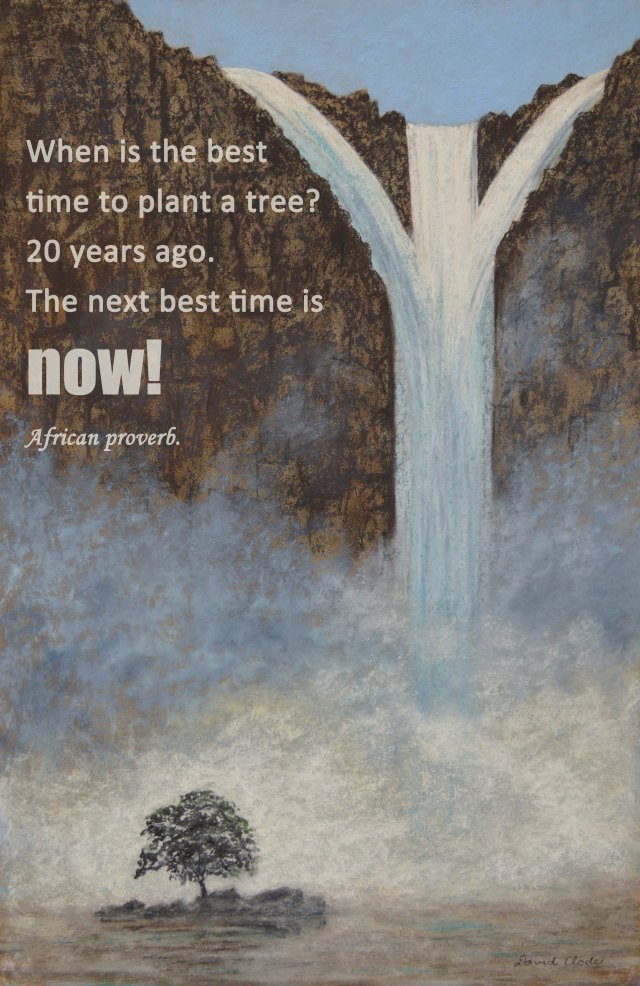 When is the best time to plant a tree?

See also the page “Zai holes, roof garden, circle gardens”, and “Stacked gardens/Sack gardens”- click on the buttons at the top of the page.