Artificial reefs which look close to natural, even before anything is growing on them. Varying the sizes and distances between the reefs would also add to a more natural look. Photo: philstar.com.

Some photos of artificial coral reefs below: 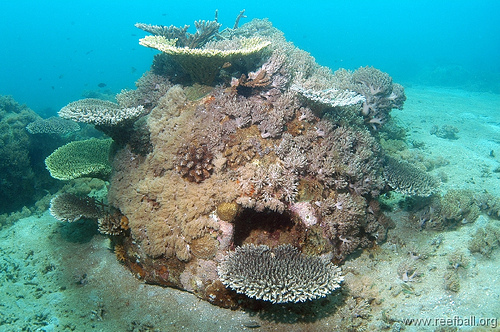 Reef ball – a large man made  concrete “Igloo” with holes in it. Starting to look like a natural bommie. Photo: Reefball.org.

Reef balls are great, however they are large and very heavy, requiring heavy machinery to place them.

Varying the sizes and distances between the artificial reefs would add to a more natural look. They could also be clustered together, and three reefs together could have a fourth wedged between and on top of them, to create a variety of natural-looking configurations Photo: philstar.com.

Artificial reefs similar to the above could be made with concrete in concave holes on a beach near to where they will be placed. This could be an activity for both children and adults at holiday resorts located near the sea, to expand existing reefs or make artificial reefs in more accessible places.

I think that three “mouse doors” at the base, and one hole at the top would be better. If they are about 70 cm to one metre (one yard or less) in diameter, and about 10 cm (four inches) thick, they could be carefully placed on a tarpaulin, before sliding them down the beach, and once in the water, one or perhaps two strong people could carry them out as deep as they can at extra low tide. The reefs would then be within easy snorkelling distance and depth for tourists.

I think that such an activity could increase tourist numbers and satisfaction for tourists visiting the Caribbean, South-east Asia, Pacific islands, the Red Sea, East Africa, Indian Ocean islands, etc.

Resort owners/operators may also get repeat custom, because some tourists may return to see the progress of the reefs they have made. 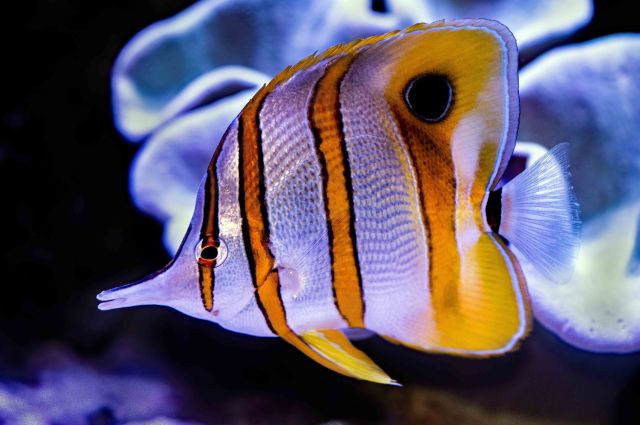 No-fines concrete blocks used in road construction. No-fines concrete artificial reefs could be lighter and placed manually. The nooks and crannies should provide a suitable substrate for coral to grow, and provide homes for smaller creatures. Photo: David Clode.

No-fines concrete could be useful for making artificial reefs. The aggregate could possibly be coral rubble, or even construction rubble, however a dome or igloo shaped reef made entirely of no-fines concrete would probably not be very strong and is likely to crack or break. A possible compromise would be to use normal concrete with an outer skin of no fines concrete, because the rough surface with cavities is likely to increase the recruitment of corals, sponges, seaweeds etc, and provide homes for small creatures.

Two pieces of cement/mortar which I made over 20 years ago using beach sand derived from coral. The mixture worked well, and is still working well after all this time. The material is very similar to the naturally formed “cement rock” on which they are sitting. Photo taken at Green Island on the Great Barrier Reef, Australia.

Pipes providing shelter/ habitat for fish, crustacea and other animals, and a substrate on which coral, sponges, moluscs, seaweeds, etc. can grow. Photo: Marinegiscenter.dmcr.go.th.org.

Concrete bricks – holes/tunnels and surfaces on which coral can grow, but not aesthetically pleasing. Photo: Reefresilience.org. 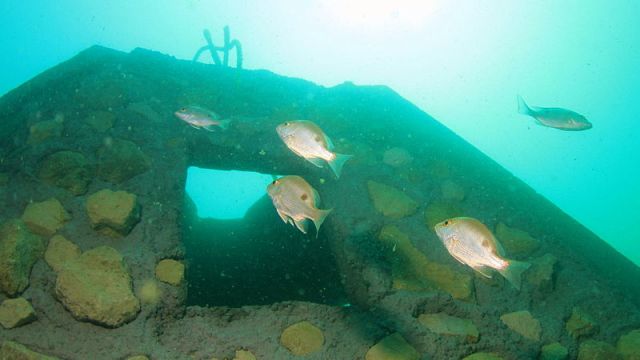 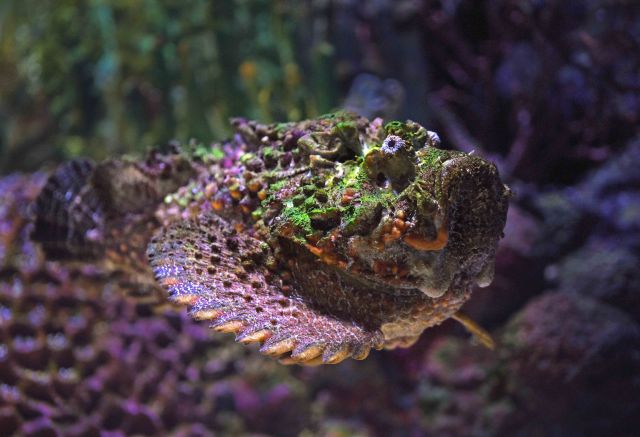 Natural regeneration of coral on a concrete pylon, exposed to the air during an unusually low tide. Green Island. Photo: David Clode.

Soft coral growing on a concrete pylon, exposed during a very low tide.

Oysters growing on a painted steel pylon at Green Island. Even if you don’t want it, life will even find a foothold on the least desirable surfaces, including the hulls of boats and ships. 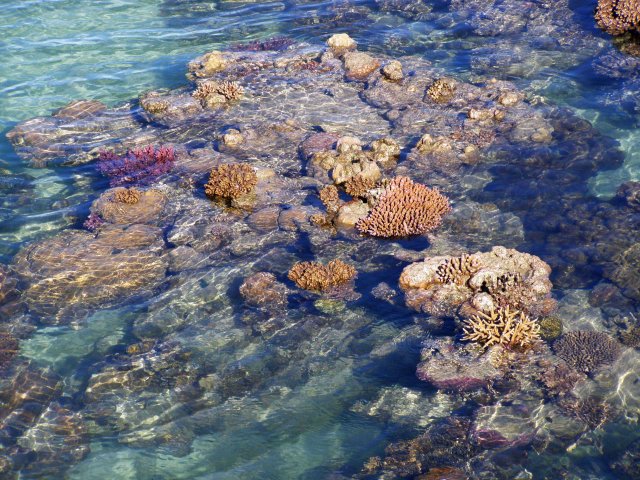 A Clown Anemonefish tends to it eggs (below and to the right of its head). Cairns Aquarium. Photo: David Clode.

A Clownfish peeks out through a curtain of sea anemone tentacles at the Cairns Aquarium. Photo: David Clode. 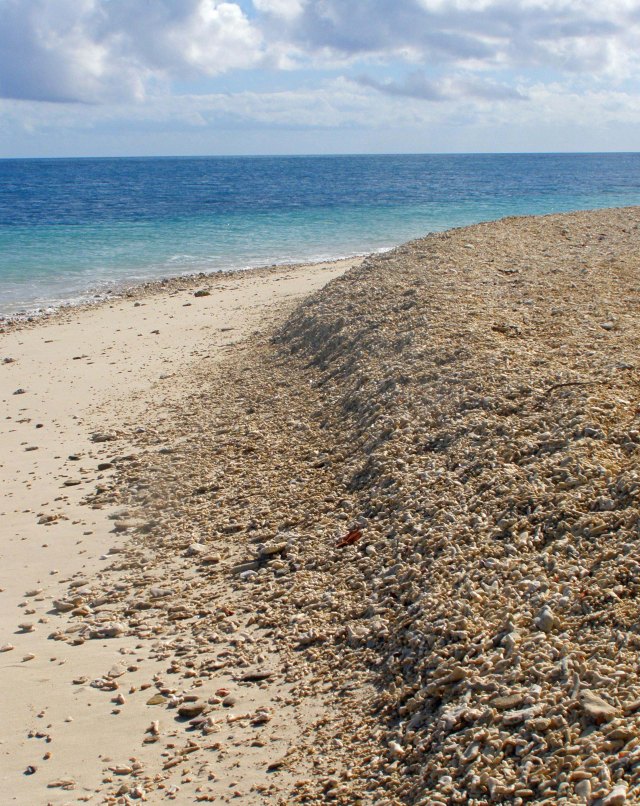 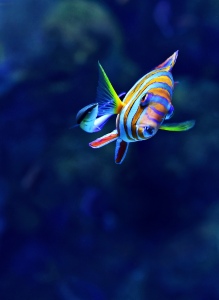 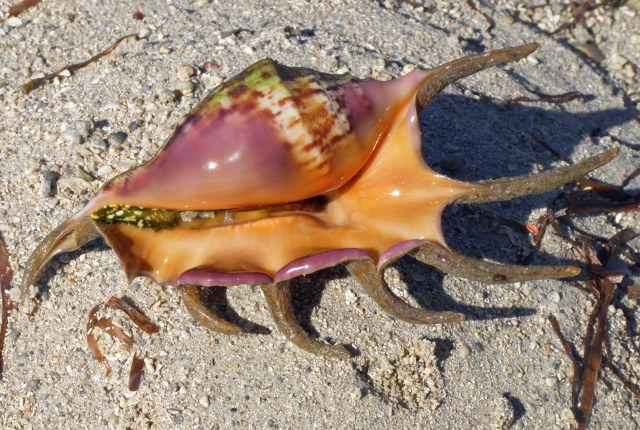